Can you believe it? This autumn will be the fifth anniversary of the inception of the DigiPal project and its mission to explore strange Anglo-Saxon letter-forms, to seek out new evidence for scribes and scriptoria, to boldly go where no palaeographer has gone before. And what better way to celebrate than to organise another DigiPal Symposium?

More details nearer the time, but expect the usual mix of palaeography, manuscripts and digital humanities.

Looking forward to seeing you there!

And as if that wasn't excitement enough for one blogpost, here's a sneak preview of one of the newly-photographed images that we'll be adding to the DigiPal site over the next few months. It's a detail from the Durham Ritual (Durham Cathedral Library, A.IV.19, folio 14v), featuring an Old English interlinear gloss added in red by Aldred, c. 970 (note his use of the rune "dæg"). Watch this space, as they say, and in the meanwhile you can see more examples of Aldred's handiwork in DigiPal here. 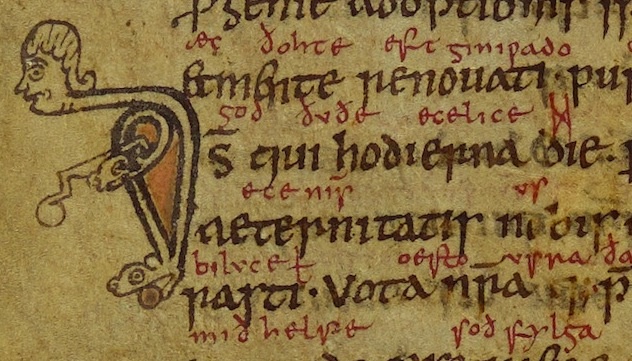