After some time since the last instalment in the 'Describing Handwriting' series, we have now implemented the model and started putting it into practice. Unfortunately this is not  publicly available yet but is only 'behind the scenes' in a password-protected site, mainly because we do not yet have permission from any of the libraries to publish any images. We have found the model to be very useful indeed, though, and have only needed a few fairly small emendations (which I will describe in a later post), so I thought it might be interesting to give you a taste of how we are using it. If you are interested in more then have a look at my paper at DH2012, a full video of which is available online.

First, we have a custom annotation tool which allows us to annotate images of manuscript pages. This is done using a standard web browser which allows us to draw boxes around particular graphs. The system 'knows' which scribal hand(s) are on the page, and it also 'knows' what the components and possible features of each allograph are. So, once we annotate a graph, we tell the system which allograph it is, and then it allows us to specify the components and features that are relevant. The interface looks like this at the time of writing, although it's changing constantly as we test and develop it further (click on the image to enlarge): 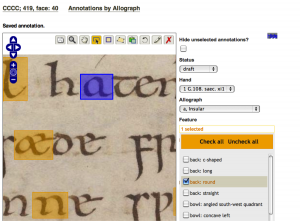 Once we have this information then we can do very powerful searches for graphs. For example, I can easily ask for all scribal hands attributed to, say, Canterbury. In the prototype system, this is what I see (again, at the time of writing): 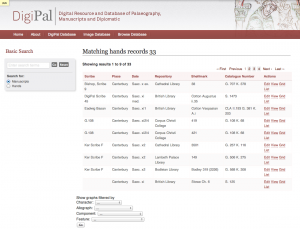 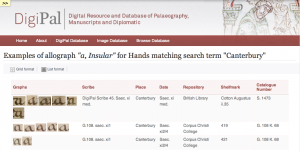 But I am not limited to single allographs. I may want all examples of (any) Caroline form. I can set Allograph to 'Caroline' but not specify the Character. The results are now this: 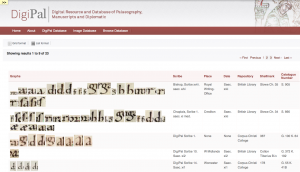 We can go further, though. Let's suppose I'm interested in aspects of style. Specifically, I want to see minims on graphs. Not minims on any particular letter (character), but any minims. That's fine, too: I simply filter for graphs with Component 'minim', and I get the following: 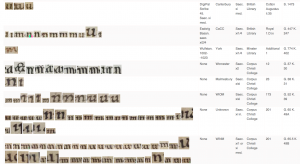 I may be interested not in any minims, but in finding out which scribes wrote minims with approach-strokes. That's fine: I set Component to 'minim' and Feature to 'approach-stroke': 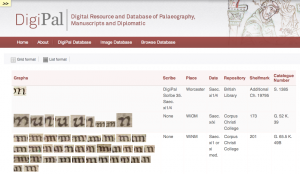 If I'm interested in approach-strokes generally then I can do that too: 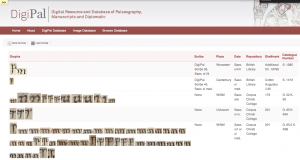 That, then, is a quick 'sneak peek' at the current model for handwriting being put to real use. We still have a long way to go: the interface needs a lot of work, and we have very many more images to annotate, for a start. We're also still in the process of adding idiographs, but we have them already for nearly five hundred scribal hands and just need to import them into the system, so that should be in place very soon.

I personally am already finding this extremely useful for my own research and teaching, and I hope it will be invaluable for many other palaeographers. But what do you think? Does it sound like something you might want to use, or do you think are we on the wrong track entirely? Please let us know now, so we can fix any problems before it's too late!