The Lindisfarne Gospels (British Library, MS Cotton Nero D.iv) with its playful half-uncial script, splendid carpet pages, and zoomorphic ornamentation is one of the best-known and most loved items in the British Library. Michelle Brown has gone so far as to call the manuscript "one of the great landmarks of human cultural achievement".[1] Written in Latin in the eighth century by the artist-scribe Eadfrith, the manuscript contains the Latin text of the four Gospels and is more than 500 pages long (or 259 folios). In the mid-tenth century, a priest by the name of Aldred added an Old English translation above most of the Latin words (a practice known as interlinear glossing). As Aldred worked his way through the impressive volume, he revisited certain passages to add additional translating words and inserted occasional marginal notes of a more extensive nature. In effect, this was Aldred's personal meditation on the Latin text of the Gospels.

The beauty and importance of the Lindisfarne Gospels as national and scholarly treasure is indisputable. Sadly, in recent years the more than a thousand year old volume has begun to show signs of its age. Over the centuries, damage to the vellum, writing and pictures has resulted from exposure to fluctuating temperatures, humidity and inappropriate handling. Perhaps the most extreme example is recorded by the medieval historian Symeon of Durham (hereafter S of D) in his Historia de Sancto Cuthberto (which may be loosely translated as the "History of St Cuthbert"). S of D notes that a volume (almost certainly the Lindisfarne Gospels) was washed into the sea when the Lindisfarne community attempted to decant to Ireland. Taking this and the miraculous survival of the book as an "act of God" (excluding themselves from an insurance claim), the monks gave Ireland a miss, thereby avoiding the prospect of future claims of a shared heritage between the Lindisfarne Gospels and the Book of Kells.

It is not just waterstains which have made their mark. Throughout the history of the manuscript it has been subject to poor handling, including the use of candle light (discouraged by many modern manuscript librarians), spilled ink, and an accumulation of finger dirt, grime and grease. All this has led to the degradation of the vellum. While the alarm over this has been downplayed, it is clear that the manuscript is in a fragile state, exhibiting signs of physical decline. Commenting on this in 2003, Michelle Brown -- once described as the "only person on earth authorised to turn the pages of the Lindisfarne Gospels" -- noted that "whenever the pigment moves, it flakes."[2] 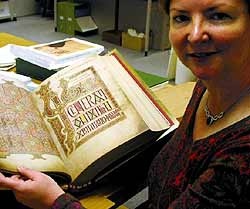 Using the cutting-edge techniques offered by microscopy, imaging scientist extraordinaire Christina Duffy was the first to demonstrate the extent of the decline, uncovering what has since been called the "moon crater" effect (named after the craters which pock the surface of the moon). Viewed at high magnification, Duffy demonstrated the presence of cratering in many of the much-admired decorations.

(For the full extent of this, see Duffy's article, but steel yourself for some alarming images of deterioration:  http://britishlibrary.typepad.co.uk/collectioncare/2013/07/under-the-microscope-with-the-lindisfarne-gospels.html)

The extent of the flaking noticed by Brown has been surveyed by Professor CA de Burghy who says that within as little as a few decades we could be left with the unappetising prospect of a "parchment crumble" where once was this landmark of western civilisation.[4]

So what can be done to halt the decline of this national treasure? Until recently, it was accepted as gospel that the manuscript could not be restored, only maintained. Things would now seem to have changed with the revolutionary advances made by conservation scientists who are finding innovative ways to restore and stabilise our cultural heritage. The techniques in use combine more traditional approaches with cutting-edge laser technologies. To clean the grime and detritus from images, organic solvents could be used, the most common solvent being water, often combined with chelating agents, surfactants or salts to control pH.[5] Interestingly, the use of water for the purposes of cleaning was one pioneered by the Anglo-Saxons, so it is pleasing to see the rediscovery of old practices. Whereas the Anglo-Saxons are likely to have used cloth or other organic materials to apply the water, conservation scientists deploy the cleaning solutions with gels and sponges which are thought to offer a more precise level of control. A far cry from the wine and sponges made of bread that were used to "restore" the Sistine Chapel in the seventeenth and early eighteenth centuries.

One strategy that the Anglo-Saxons did not have at their disposal was the use of laser ablation which removes surface deposits with targeted bursts from a laser beam. This revolutionary approach was pioneered by Salvatore Siano, a physicist at the National Research Council Institute of Applied Physics in Florence, who demonstrated that laser bursts of only a nanosecond in duration were the least destructive. In lay-person's terms, this process relies on the "neodymium-doped yttrium aluminium garnet (Nd:YAG) lasers commonly used in conservation which emit light of 1064nm wavelength, in the near infrared".[5] The hand-held, laser devices are set to "stun" and then used by conservation security officers to zap the surface of the vellum, expanding the surface and causing waves of pressure which suck up surface detritus. This may be compared to a household vacuum cleaner (using the optional laser attachment).

The question which remains is how much to remove of the accretion of grime, grease, waterstains, smudged ink, and various other forms of damage. One option being discussed is an attempt to restore the manuscript as closely as possible to our notion of that originally produced by Eadfrith in the early eighth century. This includes controversial plans to restore the colour and vitality of the pigments -- a proposal which has been compared to the equally controversial restoration of the Sistine Chapel. While the arguments on both sides of the conservation debate continue to rage, an aspect troubling to palaeographers and lexicographers is the suggestion that the restoration might present the opportunity to remove all later medieval interventions, referred to in the working paper as an "plague of scribblings and graffiti". It seems that included under the category of "graffiti" is Aldred's interlinear gloss. Proponents of this approach cite Simon Horrobin who has has recently categorised the gloss as scruffy, and also JEP Gilbert who decried it "an aesthetic disaster unparalleled in insular manuscripts".[6]

While nothing has been decided as yet, an artist's reconstruction of what the "restored" Lindisfarne Gospels might look like can be seen here:

If the argument to erase Aldred's gloss prevails, then this will be yet another proof of the old adage that the art historian's gain is the philologist's loss. In the meanwhile, a number of pages from another manuscript with Aldred's so-called graffiti, the so-called Durham Ritual (Durham Cathedral A.IV.19), have been added to the so-called DigiPal database and can be viewed here: Durham Ritual. Development of the application of the DigiPal database to the Lindisfarne Gospels is under consideration, project name "GlossPal". We'll keep you posted as and when we hear more about the Lindisfarne Gospels Restoration Project.

[4] Personal communication with the author of this piece.